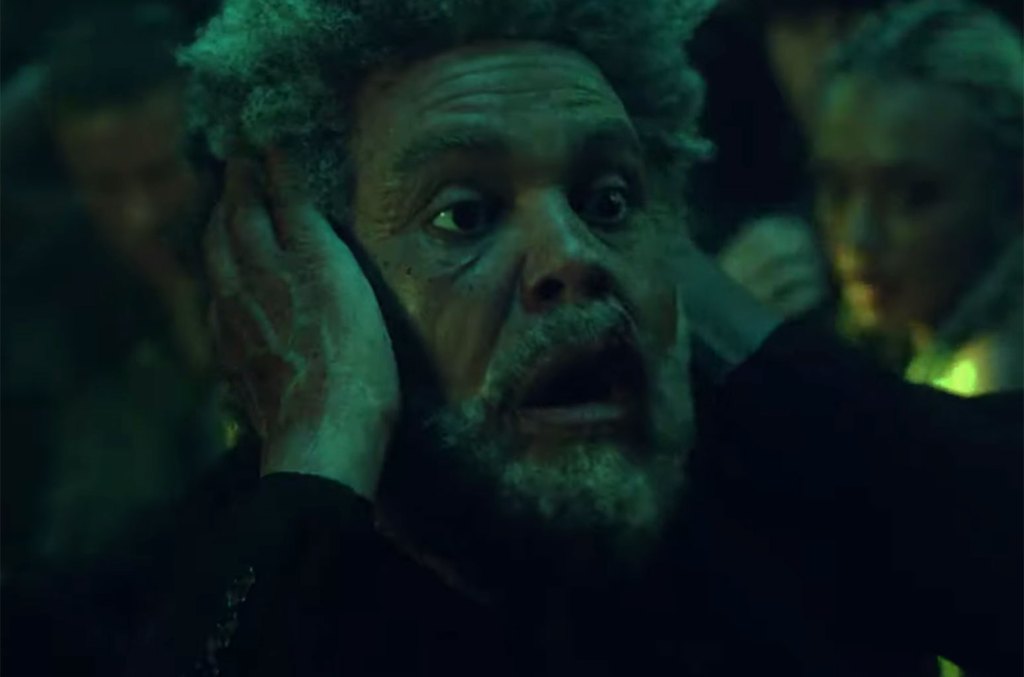 At this point only The Weeknd really understands the emerging storyline behind his No. 1 album Dawn FM. But thanks to a new behind-the-scenes video that takes fans inside the filming of the dramatic visual for the album single, “Gasoline,” we get a glimpse of the intricate machinations that went into the climactic scene where present-day Abel fights an aged-up version of himself.

The clip — tagged as the “XO Vision” — opens with a make-up artists applying the aging wrinkles around the singer’s eye as he stands still amid a room full of writhing bodies in a club scene. Soon enough, 2022 Weeknd pops in, sitting in a director’s chair watching footage on a monitor while getting a touch-up on his hair before we’re back to old man Abel standing still as a bloody lip wound is painted onto his mouth.

The camera then pans and zooms in on some extras who’ve been transformed into disfigured monsters, with old Weeknd managing a slight smile through facial prosthetics that make him look like he’s been severely beaten. That’s the wind-up to a truly trippy scene in which the singer tries to choke out his wrinkly doppelgänger, with each man grabbing the other around the throat.

Some acrobatic fake head-butting leaves old Abe battered and bruised, leading to his young counterpart kicking him in the stomach. The three-and-a-half minute clip ends with a distressed-looking Weeknd staring up into the lens with a very concerned look.

Dawn FM album made a big splash in its debut week, topping charts in 10 countries around the globe after its release on Jan. 7. The album, a sort of companion piece to 2020’s blockbuster After Hours, debuted at the top of the Official U.K. Albums Chart — as well as, according to The Weeknd’s label, Republic Records, the official charts of Canada, Australia, Ireland, Finland, the Netherlands, New Zealand, Norway, Sweden and Switzerland. Two of the set’s tracks also made the top 10 of Billboard‘s Global 200 chart, tracking the biggest songs in the world each week — led by the No. 2 debut of “Sacrifice,” which accounts for a mighty 53.5 million global streams this week, according to MRC Data.

See some stills and watch the BTS video below.

12 Classic Bags You’ll Have For Years to Come, All

The Boys’ College-Set Spinoff Gets a Title and Confirmed Cast

Lisa Rinna Leaving ‘RHOBH’ After 8 Seasons: ‘I Am Excited

11 White Boots You Can Wear With Anything in Your