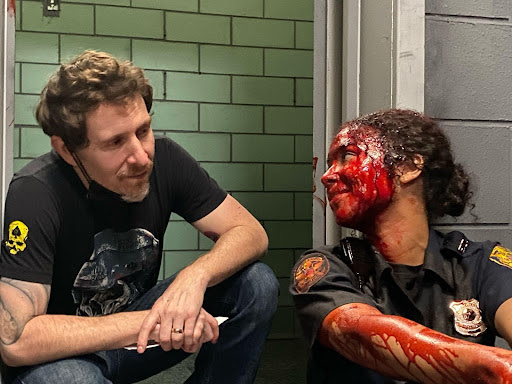 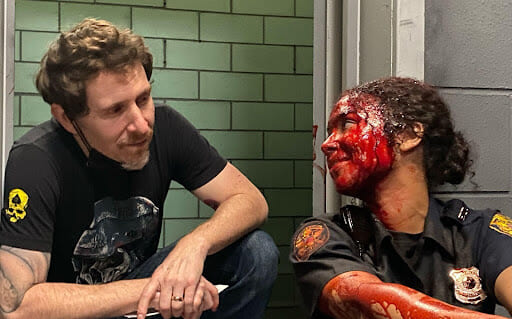 Production has wrapped on the first feature from Welcome Villain Films, an expanded reimagining of the 2014 critically-acclaimed horror hit Last Shift. It features a stacked cast led by Jessica Sula (Split) and special effects make-up from the team at RussellFX (Hellraiser). The new film is helmed by director Anthony DiBlasi (Last Shift) and co-written by DiBlasi and Scott Poiley (Last Shift), the same creative team behind the original film.

“The world Scott and I envisioned for this story was always meant to be a dark, twisted rollercoaster through Hell, and partnering with Welcome Villain allowed us to fully realize our vision without the limitations we faced with the original film,” says filmmaker Anthony DiBlasi. “The practical effects, authentic locations, incredible cast, and unwavering support from team Villain propelled this project to an entirely new level that we hope will more than satisfy existing fans and new fans alike.”

“This has been such a wild and fun project to be part of, and working with Anthony and the team has been amazing,” says Jessica Sula. “It was a rewarding challenge to take on this role and bring something new and unexpected to the character, and I think this movie will definitely give audiences a good scare!”

“Moviegoers should buckle up and prepare for a vicious, unrelenting nightmare with a powerhouse leading performance from the supremely talented Jessica Sula. Regardless of your expectations for this film, I promise you, you’re not ready for what’s in store.”

The film focuses on a rookie police officer (Sula) who willingly takes the last shift at a newly decommissioned police station in an attempt to uncover the mysterious connection between her father’s death and a vicious cult. Throughout the night, she finds herself barraged by terrifying supernatural events while unveiling the truth behind her family’s twisted past. This reimagining takes the premise of the 2014 festival hit and flips it on its head, thrusting viewers into a relentless, adrenaline-fueled, bloody cult nightmare.

Last Shift is on track for post-production to be completed this fall. Welcome Villain will distribute the film in 2023.

The Rookie Round Table: Should Tim Have Suffered Longer For

Which Medical Shows Are Most Realistic? Ranking ‘Grey’s Anatomy,’ ‘The

The 9 Most Expensive-Looking Pieces on the High Street This

Inside The Weeknd’s After Hours Nightmare Experience at Universal Studios

Who Will Be ‘The Kang Dynasty’s New Avengers?