‘Final Prayer’ Has The Most Gut-Wrenching Ending In Found Footage 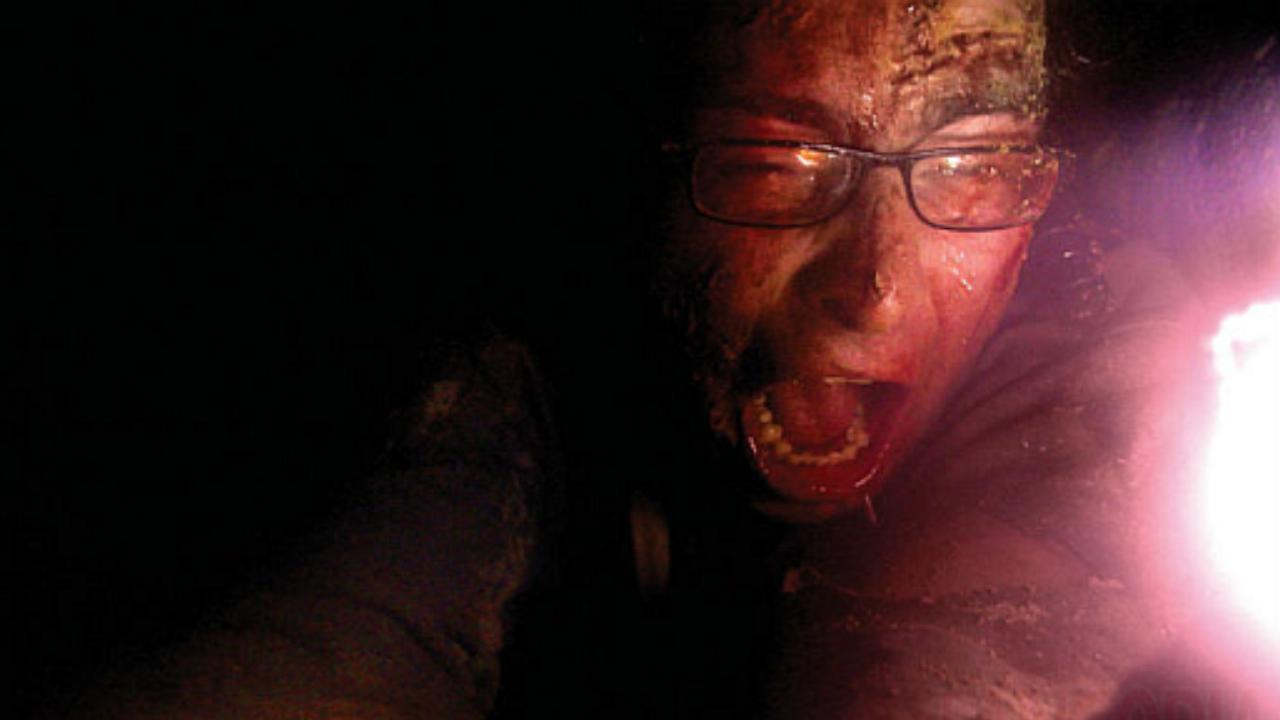 This found footage folk horror will eat you alive. 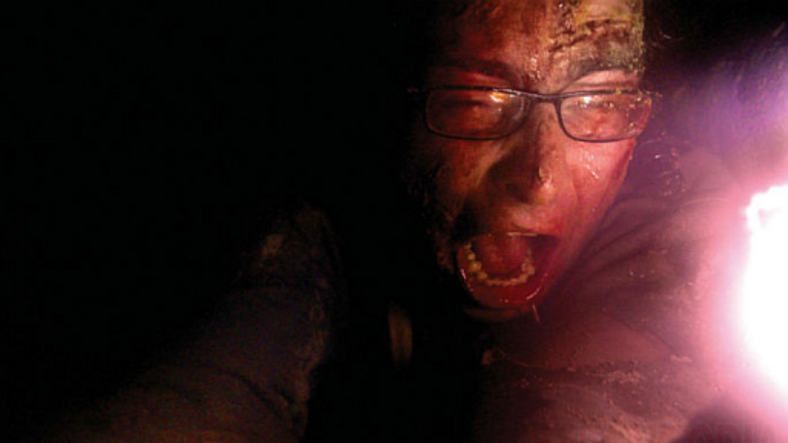 A few years ago, in the middle of the night, I was trolling the internet for a horror movie to watch. The more obscure, the better was my guiding principle. Somehow, I stumbled upon the 2013 found footage film Final Prayer, also known as The Borderlands. It’s a basic enough premise, where a group from the Vatican goes to a church in the British countryside to investigate a potential miracle. Of course, what they find is much more sinister. It’s a pretty routine found footage premise, the ending is what makes this film nothing short of remarkable, disturbing, and downright upsetting. It upset me to the point that I refused to ever watch it again. Until this week.

This rewatch only deepened my appreciation for just how depraved this film gets, as well as helped me realize that it’s the typical Catholic horror. It’s actually a sneaky folk horror film about pagan beliefs, sacrifice, and the futility of believing in a Christian God.

Final Prayer opens with Deacon (Gordon Kennedy), a skeptical religious brother, and Gray Parker (Robin Hill), a technology expert, arriving in the small village with a slew of cameras. A recently reopened church is reportedly experiencing something miraculous. So, they are meant to investigate and essentially debunk the claims. They’re required to film every second of the investgation by the Church after a recent tragedy in Brazil. So, they don camera headsets and start their journey to the sacred location to set up their surveillance equipment.

There’s a crucial piece of foreshadowing on this initial visit disguised as a throwaway line. As Deacon and Gray trudge up the hill, they see a dog devouring a rabbit. Gray reacts in disgust, then sighs and simply says, “that’s nature for you, Deacon. Big stuff eating small stuff.” No attention is really drawn to this moment. But upon this rewatch, I realized that this single line essentially establishes what’s to come for this doomed group. 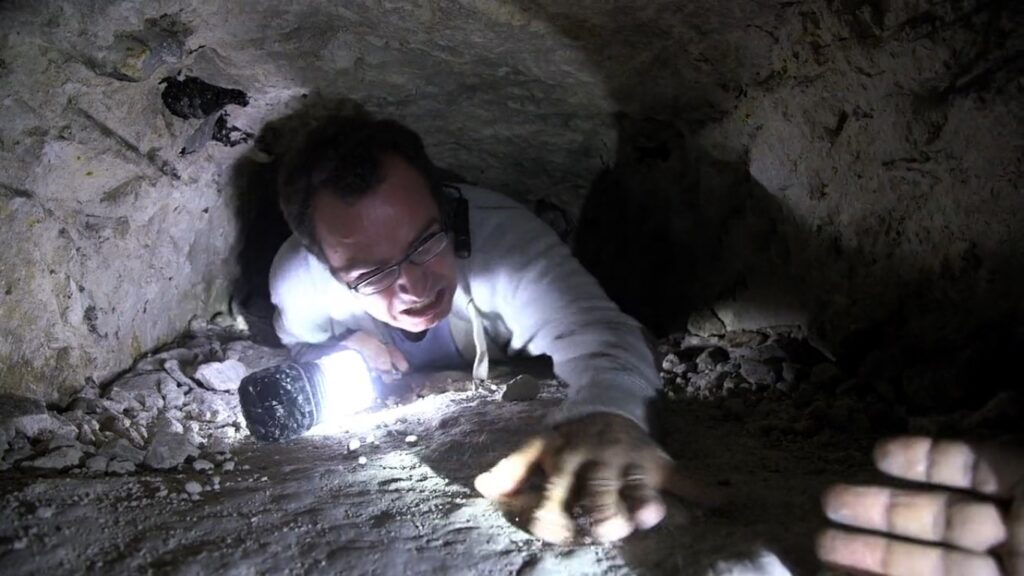 The majority of Final Prayer is spooky, but in the expected ways. Stuff falls off tables, disembodied baby cries float through the pulpit and door open of their own accord. A lamb is even set on fire and dropped by their cottage. A casual warning not from the paranormal, but from the surrounding townsfolk bent on hiding the church’s secrets. Pagan symbols are found on walls, and the supposed haunting only gets worse.

But it’s the final act where Final Prayer moves into increasingly unfamiliar territory. Gray and Deacon discover a hidden door that leads down into a maze of caves that go deeper and deeper into the earth. They’re following the screams of their colleague Father Mark Amidon (Aidan McArdle), hoping to save him before it’s too later. Along the way, they discover a sacrifical alter. As they slowly illuminate the room with their lanterns, they see the alter is surrounded by hundreds of tiny skeletons, the remains of babies used for ancient rituals.

Yet this grim revelation doesn’t deter Gray and Deacon. They continue their descent and the passageways begin to narrow. Think The Descent levels of claustrophobia as the two men barely squeeze through tunnels, hyperventilating in the process. Finally, they dive into the final tunnel, full of dirt and suspicious fleshy spots on the walls. Gray yells, “What’s that smell?” Deacon quickly realizes something’s wrong up ahead. The camera flashes up and illuminated something… fleshy. Something is contracting and squelching. Something is incredibly wrong.

Gray tries to back up. But the tunnel is shut. Whatever was up ahead was also right behind them. They’re trapped. And then, something begins to flood the space. It starts to burn Gray and Deacon. It’s stomach acid. The two men are being digested in front of our very eyes. And it isn’t just a quick shot of the horrors. It’s a minutes-long sequence where we see skin melting off faces and hands. Deacon vomits up blood. Gray screams in unbelievable pain. The first-person perspectives makes it all the more horrifying. We are up close and personal, laying in the literal belly of the beast with our two doomed souls. 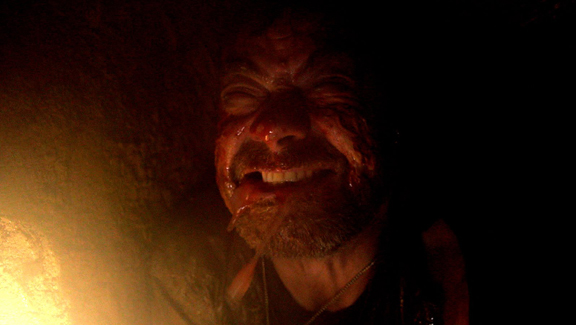 As Deacon starts to recite the Lord’s Prayer, everything falls into place. This wasn’t a case of divine intervention or demonic possession. It was something much more real and horrific laying deep under the dirt of seemingly holy land. That something is hungry and has been for centuries. A house of God had no chance in combatting against the ancient being under the hill. It literally devours a part of the Church, eating men of the cloth who believe they have the power of Jesus Christ on their side. Not only is this ending disgusting to watch, but it’s also incredibly nihilistic, too. There’s no hope; only pain.

Even the film’s title gives away its final moments. But the viewer doesn’t know that. Director Elliot Goldner cleverly sets up all these little breadcrumbs that show you the dark direction Final Prayer is going. As Deacon mutter the Lord’s Prayer and Gray screams in agony, you slowly realize just what Goldner has done. That psychic damage will never be undone. But frankly, I don’t want it to be. Final Prayer is an exercise in subverting audience expectations of the possession found footage movie. Just when you think you know where it’s going, Final Prayer chews you up, spits you out, and leaves you squirming on the floor.

Final Prayer is available to watch on Tubi.

admin
Previous articleThe Homies of Horror Were Terrified by ‘Scream’ And ‘Titanic’
Next articleFAST AND FURIOUS 9 : 5 Minute Trailers (4K ULTRA

Hildur Guðnadóttir: ‘Music is a way to express yourself beyond

Hailey Bieber Wore the Jumper-Jacket Duo That Goes Perfectly With

Inside Todd Chrisley’s Prison: Everything to Know About the Florida