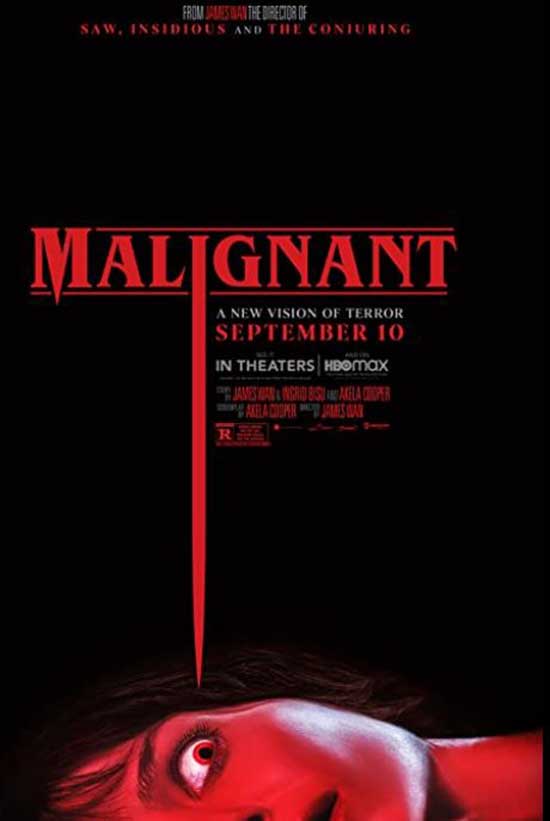 Madison is paralyzed by shocking visions of grisly murders, and her torment worsens as she discovers that these waking dreams are in fact terrifying realities.

In the annals of cinefantastique history, there is something of a linking narrative between the best of cinema that manifests into a solid platform on which to build that classic gem. It is the look, the set design, the atmosphere, the feel and appropriate sense of time and place. It is the visual that, when mixed with the visceral, the performances, script, direction and other areas of film creation, makes for a critically successful end product that wows critics all while separating eager genre fans from their hard-earned dollars at the box office. Burgeoning horror guru James Wan’s latest creation, Malignant, is a stylised to the hilt affair that is as beautifully haunting for the eyes to take in as it is relentlessly dour for the mind to absorb. It is as if the bleakness of the world his heroine Maddie lives in does not allow for even the barest shred of hope or a sliver of joy.

The story begins with her, pregnant and surviving yet another assault by an abusive boyfriend, who later dies at the hands of a shadowy presence in their home. The attack puts Maddie in the hospital and causes a miscarriage. Two weeks later, she begins reconstructing her life and becomes tormented by eerie visions of murders she seems to be witnessing. As two local detectives investigate, there appear to be more questions than answers. Are these figments of her imagination? Is she the killer? What are the ties to her past? Is something more sinister at work here?

The true stars of this piece are the ornate, mixed era (old world Seattle meshed with the modern) production design of Desma Murphy, David Scott’s dank art direction (very muted hues, mostly grays) and Michael Burgess’ low light and shadow cinematography (if the visuals in my nightmares could be attributed to an actual DP, it would definitely be Burgess doing the filming). It helps to have actual Seattle locations to play with, notably the tour scenes of old world underground. Wan and Burgess make use of the high ceiling and expansive buildings to show some truly unique camera angles (especially the overhead room to room tracking such as in the early scenes between Maddie and her abusive partner).

The main flaw in the film lies with the decision by Wan, screenwriter Akela Cooper and story writer Ingrid Bisu (Wan also getting a story credit) to have script almost completely devoid of anything close to humor or hope. Combine this with characters who each seem completely damaged nearly beyond repair and you have one long journey to the darkest pit of hell for an audience looking to escape their reality for two hours.

As in many of his works, Wan does not shy away from the grotesque effects of both the practical and digital variety to truly unnerve his audience. Much of the work went to the fabulous talents at Spectral Motion, with some utterly gory, garish blood splatter in the kills (the mutilated corpse found in a bed in one scene had me turn away slightly and I’ve been a nut for horror for some 48 years). Wan’s love of effects, especially the practical, is no mystery. As he mentioned to SFX magazine in its latest issue, “It’s a pleasure for me to play with prosthetic effects that I’ve never really played with before on this level. So, it’s more of a blood and guts, gory movie from the ’80s than it is more of a quiet haunted house movie.”

Credit also the performances of the cast for fleshing out the characters a bit to give them dimension that you might not see in standard horror fare. Annabelle Wallis gives Maddie elements of fear, fragility and courage all in one bundle and carries much of the story load. Maddie Hasson holds her own as Maddie’s best friend and step-sister Sydney. George Young and Michole Brianna White are appropriately tough as nails as the cops on the case.

If you are seeking a film to present to an appreciation class on the topic of horror set design and how a chiller feature should look, Malignant is just the movie to select. As fodder for that evening escape from your real-life troubles, ehh, umm, well you just may want to find an escape room that’s a bit less bleak.

admin
Previous articleVENOM 2 LET THERE BE CARNAGE “Venom Wants To Eat
Next articleBritney Spears Gets Lunch With Lawyer Mathew Rosengart: ‘This Man

Why Richie Faulkner Thinks Zakk Wylde Is the ‘Only Guy’

Which Iconic TV Sleuth Is Mindy Kaling’s ‘Velma’ Most Like?