Toxic expectations of thinness plagued the early 2000s. So why, given that Gen Z champions inclusivity, is the Y2K aesthetic trending?

In the early 2000s, I dreamed of being thin. I flipped through issues of CosmoGirl and J-14, longing for a flat stomach like the pop stars they so frequently featured. I didn’t look like them; in fact, I never would look like them: I was a bullied fat kid who wore soccer shorts and Gap hoodies to school while the popular girls rocked platform flip-flops and jewelled tank tops. But it was more than just closet envy. I studied LiveJournal blogs that taught girls like me how to be skinny. I dieted. I hid my my body and blamed it for keeping me from the life I wanted. I thought thinness was my ticket to being liked, accepted and desired by the world around me.

Since then, I’ve learned to appreciate, and even love, my body as it is, thanks to body-positive influencers, healthy relationships and a lot of therapy. So when I saw miniskirts, low-rise jeans and tube tops saunter down the Fall 2022 runways at Miu Miu, Versace and Diesel, my brain short-circuited. Desperate to pretend this was a bad dream, I took to social media to do some stylish digging. A quick search of “Y2K” on TikTok produced videos—primarily featuring ultra-thin white-presenting women—with more than seven billion views. It was all over Pinterest, too: searches in Canada for “Y2K inspired outfit” and “early 2000s style” increased 20 and 23 times the amount since last year alone, respectively. I thought back to that adolescent girl who hated herself and wondered “Didn’t we all learn our lesson the first time?” 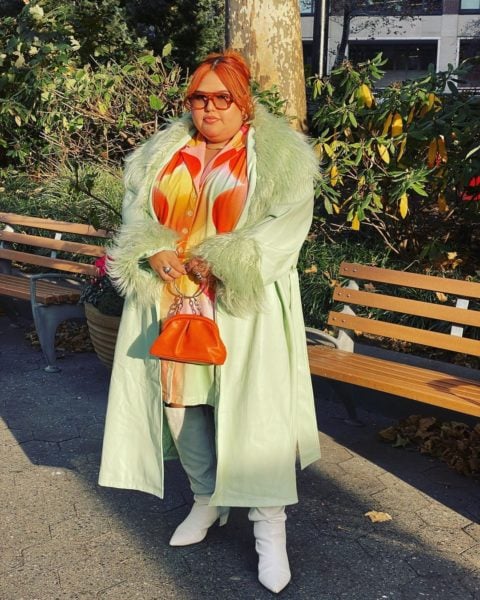 “Nothing tastes as good as skinny feels”

The 2000s’ Y2K aesthetic was one of complete abandon—an embrace of the future with a dash of a retro past. Suggestive Juicy Couture sweatsuits, extreme-low-rise denim and barely-there bandana tops were scattered throughout every issue of Vogue. You need only look at the red-carpet queens of the 2002 MTV VMAs to get the picture: Christina Aguilera, Britney Spears and Paris Hilton.

At the time, these trends were a colourful, fun and gaudy response to the more conservative style of the previous millennium and rode on the coattails of ’90s heroin chic, an aesthetic that introduced us to Kate Moss and the “waif” body type. And while that decade at least favoured baggier designs, in the 2000s, the silhouette became alarmingly slimmer. It was less about fashion and more about celebrating thin bodies. In fact, the body was the fashion.

“Y2K style is largely grounded in thinness,” says Gianluca Russo, columnist and author of The Power of Plus: Inside Fashion’s Size-Inclusivity Revolution. “But it went beyond clothing. Models’ bodies inevitably became an asset in nailing Y2K style. The message was clear: This isn’t for plus-size bodies.” In a 2009 interview about her role in the fashion world, Moss acknowledged her commitment to the look with the statement “Nothing tastes as good as skinny feels.”

And many seemingly agreed with her. Hospitalizations for eating disorders in women of all age groups increased 21 per cent from 1999 to 2009 in the United States alone. And many of these people are still suffering now, as editor Lucy Huber pointed out in a tweet last year: “If any Gen Z are wondering why every Millennial woman has an eating disorder, it’s because in the 2000s a normal thing to say to a teenage girl was ‘When you think you feel hungry, you’re actually thirsty so just drink water and you’ll be fine.’”

But after a toxic 10-year time period, when women like me were taught that our self-worth is dependent on our clothing size, the tides slowly began to turn. 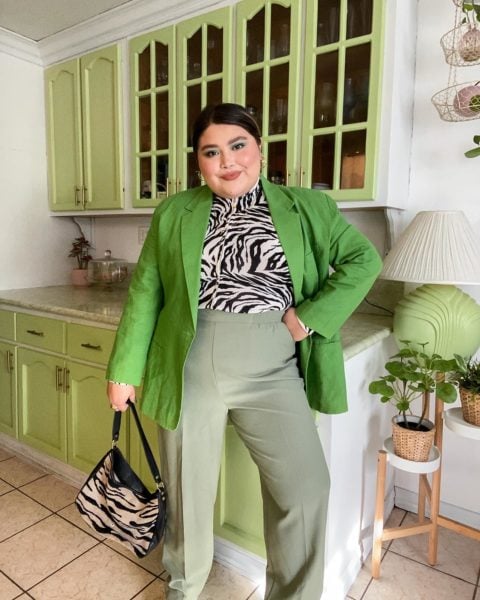 Is Gen Z to blame?

The body-positivity movement, born from the Fat Rights Movement of the late 1960s, entered small pockets of the internet in the early 2000s but became mainstream with the advent of Instagram in 2010. Fat people began leaning into visibility by using hashtags like #OOTD (outfit of the day), #effyourbeautystandards and #honoryourcurves. And then multi-hyphenate Sonya Renee Taylor’s spoken-word video of her poem “The Body Is Not an Apology” went viral, leading to an international movement and groundbreaking book, both of the same name.

The movement made its way to TikTok, too, with the hashtag #bodypositive garnering 6.1 billion views and others like #plussizefashion full of curvy folks  trying on clothes. When I log on to the platform, my algorithm feeds me all of these videos. But it’s mostly just millennials I see creating this content, while Gen Z—the generation known for fighting for diversity, LGBTQIA2S+ rights and ethical consumerism—plays with the Y2K aesthetic. Is body positivity somehow skipping a generation? And if so, why?

Well, according to Russo, there are a number of things to consider, including the fashion cycle: We’ve naturally arrived in the 2000s because it’s the decade that comes after the ’80s and ’90s, which have been trending for the past couple of years. We should also consider that low-rise jeans are new for Gen-Zers; they were either not born yet or too young to enjoy the trend the first time around.

And for many, Russo adds, it’s about nostalgia—which was especially prevalent during the pandemic, a dark and heavy time that made the boldness and brightness of the Y2K aesthetic appealing. The same dark time saw many of us dealing with weight gain, something that is completely normal but has nonetheless impacted our ability to access mainstream fashion.

It’s not necessarily that Gen Z doesn’t care about size inclusivity. After all, the mid-size movement—which promotes representation for people who wear sizes 10 to 16—was born on TikTok. Simply put, other factors just take precedence, and that’s a problem. 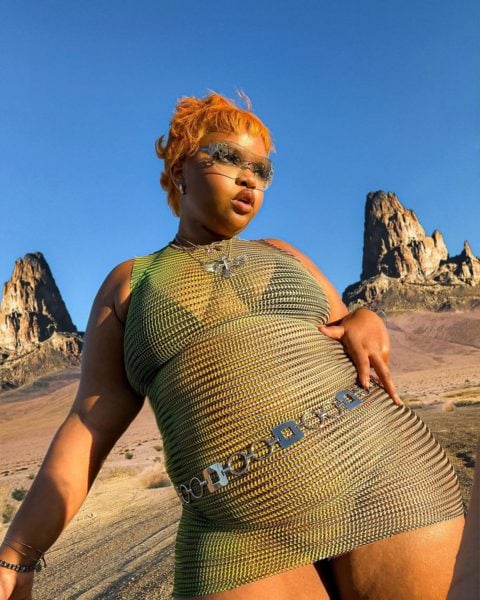 Self-esteem in a digital age

“If you’re not seeing people who look like you wearing those fashions, then there seems to be an implicit message that maybe you shouldn’t wear them,” says registered psychologist Kristin M. von Ranson. “It’s hard for youth to learn to see things with a critical eye when diet culture and the thin ideal pervades everything.” Von Ranson has helped bring to light the struggles Gen-Zers face when it comes to body image and social media with the Dove Self-Esteem Project. Its recent study found that more than half of the girls surveyed say that idealized beauty content on social media makes them feel worse about themselves. Eating disorders are on the rise again, too, with the number of anorexia diagnoses in Canadian patients aged nine to 18 increasing 60 per cent from pre-pandemic numbers. Similar numbers were seen in the United States.

Major brands aren’t helping either, with many participating in curve-washing — a marketing tactic that uses size-diverse bodies to sell products on social media without actually providing adequate sizing options to their consumers, making it seem like size inclusivity has come further than it actually has.

Where do we go from here?

Gen-Zers are new to the size-inclusivity conversation and in the early developmental stages of their own body image. “They’re still young adults and teens navigating various harmful messages around body image,” says Russo. “We can’t expect them to fight before they truly grasp what the battle is even about.” This may be true, but Gen-Zers have the upper hand when it comes to spreading the message. They dictate what goes viral, and that’s the tool that will do the most work.

The vibe is shifting, though, and Gen-Zers (with the help of their elder millennials) are proving that it’s possible to take the fun parts of the Y2K aesthetic and leave the bad behind. Plus-size fashion influencers like Tiaynna McClyde, Jessica Torres, Karina Gomez and Jessica Blair are reclaiming and ushering in a new-and-inclusive version of the 2000s aesthetic.

It’s still hard for me to fathom this updated version of a time that was so fraught with an obsession of being thin and when to be desired, cool and worthy meant building a case against the body I was given — especially when body standards haven’t changed much at all except for the speed at which they shift. But perhaps this trend, re-emerging in a time of more body-size acceptance, is offering people like me the chance to reimagine it. I won’t be buying into the Miu Miu micro-mini any time soon, but low-rise baggy jeans? I might just get behind those, if only to let the younger version of myself feel seen.

‘Take Back the Night’ Trailer Reveals an Intense Creature Feature

‘Pennyworth’ Gets a New Title For Third Season