Why Aren’t We Talking About Male Anorexia? 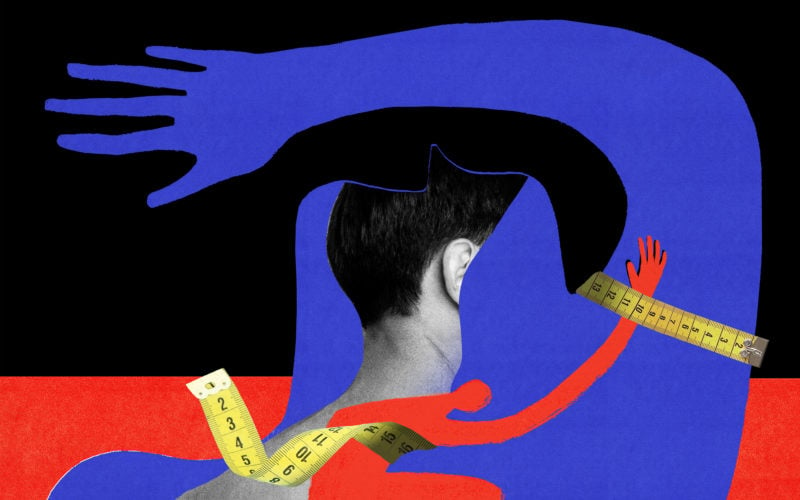 “I hope that more men like me will seek the treatment they’ve always deserved.”

In July 2019, I found myself Googling “eating disorder treatment for men.” Self-judgment and doubt crept in as I combed through the search results, wondering what my friends and family would think of my current situation.

A successful career in fashion had taken me all over the world, from London to Paris and New York to Los Angeles. My resumé boasted work with leading brands and publications, with my most-talked-about position being first assistant to a renowned editor at an international edition of Vogue. In theory, I was living the dream: sourcing haute couture gowns, spending time with supermodels and jetting off to exotic photo shoot locations. But in reality, the fashion industry was cutthroat, and low self-esteem, constant comparisons to others and endless criticism led to a severe increase in eating disorder symptoms.

Growing up in Belfast, I spent the majority of my teenage years engaging in restrictive diets, compulsive exercise and self-induced vomiting. What initially started as an effort to maintain my Irish-dancing physique became a coping and distress-tolerance tool, allowing me to numb out and dissociate from the daily homophobic abuse I was subjected to in the hallways of my Catholic high school.

I was 12 when I asked my parents to take me to my family doctor. By that point, school had become unbearable and I had been engaging in eating disorder behaviours for over a year. The doctor performed a physical, took note of my weight and calculated my body mass index (BMI), which was still within the normal range. He told me that boys didn’t get eating disorders and recommended exercise as a cure for what he assumed was adolescent depression.

My symptoms had fallen on deaf ears, and because of my gender and “normal” weight, I slipped under the radar of an uneducated practitioner and went back out into the world with no words for what I was experiencing. Shame was all that I felt.

Fourteen years later, I was living in Canada, and despite my many attempts to “fix” myself through yoga and meditation, my untreated eating disorder was still consuming my every day. Between my compulsive exercise, stimulant and laxative abuse and extensive periods of fasting, it wasn’t long before I hit rock bottom. Gaining the strength to ask for help as an adult wasn’t easy, and it was even harder when I learned that some facilities only accepted women and others had significantly low BMI requirements for admission. Over a decade had passed since that initial appointment with my GP, but I still held a deep belief that I would be turned away again and deemed not sick enough to receive help.

Luckily, I found a treatment centre in New York and was admitted within a couple of weeks. I was diagnosed with anorexia nervosa and stayed in the program for three months. As the only man there, I struggled to fit in and often questioned whether I really had an eating disorder or not. The process was intense, and I couldn’t relate to a lot of the recovery material or what my female peers were going through, but the treatment saved my life.

The vast majority of people with eating disorders experience a distortion in the seriousness of their condition,” shares Dr. Jennifer Gaudiani, medical director of the Gaudiani Clinic and the author of Sick Enough. “This results in individuals constantly thinking ‘I’m not sick enough to warrant a treatment team/changing behaviours/being kinder to myself/resting/allowing myself to decide this has to stop.’”

I’ve been fortunate to receive ongoing care and support from an excellent multidisciplinary team in Vancouver, but it’s challenging to return to the hospital each time and find that I’m the only man there. Men account for roughly one-third of the 70 million people worldwide with eating disorders, yet so few receive treatment. There are many reasons for this. “The medical firmament often shares society’s misguided and narrow stereotypes about how to identify someone with an eating disorder,” explains Gaudiani. “If a person is not cisgender, white, female, heterosexual, visibly underweight, able-bodied, young and financially resourced, they fail to ‘trip the wire’ of clinical diagnosis and attention.”

With this stigma attached, many men like me feel that there are barriers to receiving treatment. Eating disorders in men are also sometimes misunderstood and not always visible. While some men might be trying to lose weight, others are trying to increase their body size. We live in a diet-culture-driven society where disordered-eating behaviours are positively reinforced and oftentimes learned at a young age. Eating disorders thrive in secrecy. We need to talk about them openly, educate health-care practitioners and change the narrative within treatment centres so they’re more gender inclusive.

Looking back over the past three years, I’m proud of how much I’ve accomplished. It can be challenging at times to acknowledge your victories, especially when there’s often so much to process—both physically and mentally—in eating disorder recovery. The pandemic was especially difficult to navigate, and I spent most of last year in the hospital for medical, psychiatric and in-patient admissions. While there, I found solace in reading and started a book blog called Avocado Diaries. It has since grown to become one of the most popular literary review websites in Canada. I also enrolled in school and earned a mental health worker certification. I’ve learned that my voice is my biggest asset; I’m using it to empower myself and others. And I’m currently writing my memoir. By sharing my experience, I hope that more men like me will seek the treatment they’ve always deserved.

admin
Previous articleKeanu Reeves Will Return As ‘Constantine’ in Sequel Directed by
Next articleMonarch Season 1 Episode 2 Review: There Can Only Be

These Photos of Khloe Kardashian’s Daughter True Thompson and Her

Both Sides of the Blade review – An exhilarating clarity

These Are the Only Products That Give My Thin Hair

Zayn Malik Denied Claims Of A Violent Family Argument With