The Targaryens Get Bloody in ‘House of the Dragon’ Episode

Targaryens might come from a long line of warriors, but not all of them seem so comfortable with the nastiness of bloodshed. Episode 3 of House of the Dragon is largely about brutality, and the manner in which various members of House Targaryen wield it. At different points throughout “Second of His Name,” we watch Rhaenyra defend herself against a wild boar, stabbing it with a wild frustration finally released; Viserys slay a stag, his jabs lacking precision, his winces an embarrassment to the crowd applauding him; and Daemon defeat the Crabfeeder, tricking the would-be usurper into a weakened position before slicing him in half with his sword Dark Sister.

All three kills represent their characters well: Rhaenyra is a well of (barely) restrained power. Viserys is an affable but uneasy ruler. Daemon is a dishonorable cutthroat. And, as House of the Dragon moves closer to its second act, we’re falling in love with all three of them—no matter how ugly or unwise their actions.

Taking place three years after the events of “The Rogue Prince,” two key settings are smartly juxtaposed in “Second of His Name”: the war in the Stepstones and a hunt in the Kingswood. One is violent, and one is quaint. One features Daemon, fighting the Triarchy and glowing in the light cast by his dragon’s gasps of fire, while the other features Viserys, honoring his son’s name day in a genteel forest celebration. Rhaenyra is dragged along to the Kingswood, though not by choice. She’s—let’s put this gently—malcontent, having all but stopped speaking to her former best friend, Alicent, who’s birthed the king a son and is now heavily pregnant with a second child. (I’m begging you to watch this TikTok recounting the friends’ fallout.)

Alicent’s in an intriguing position here. She’s a new mother, toting around a pregnant belly at the ripe age of 17. She’s a new queen, still growing accustomed to her authority. And she’s hesitant to test out that authority on Rhaenyra, who’s resentful that a towheaded toddler seems likely to steal her claim to the throne. Alicent has little opportunity to speak her mind in episode 3, but her influence is nevertheless felt in a pivotal way: She is the one to convince Viserys to send aid to the Stepstones, setting in motion the events that lead to the Crabfeeder’s defeat.

But, before we get there, let us first feast. In the Kingswood, the Targaryen family members gather with the lords and ladies of Westeros, the wine and the gossip flowing. Whispers of Viserys’s inaction in the Stepstones gives way to outright insults, but some have other forms of conquest on the brain. Jason Lannister (Jefferson Hall) spends little time romancing before he proposes marriage to Rhaenyra, eager to build House Lannister’s status and strut a Targaryen through the halls of Casterly Rock. But Rhaenyra is not such a fan of peacocking, and is so insulted that she initiates a public shouting match with her father. She’s not the only one trying Viserys’s patience: Otto Hightower is desperate to convince the king that Otto’s grandson, Prince Aegon, should be the new heir, and a haughty Jason takes his marriage proposal straight to the king’s feet. Disgruntled, Viserys tells them both off and gets wildly drunk, only later confessing to Alicent that he worries he made the wrong choice by naming Rhaenyra heir. He did so out of guilt over Aemma’s death, but also out of love for his daughter, and now he fears he’s endangering the vision he saw so clearly as a younger man: of placing a son upon the Iron Throne.

When word of the hunt’s sought-after white hart arrives, Rhaenyra takes it as her cue to disappear, racing her horse deep into the Kingswood. Ser Criston Cole, hot on her trail, stops her long enough to indulge her in a few slow-simmering conversations, in which he reveals that he owes “all that I have” to her. The son of a steward, Criston had little standing before his rise as a tourney knight—and now, he’s a member of the Kingsguard. His respect for the princess warms her to him, though I’m sure his handsome smile didn’t hurt. 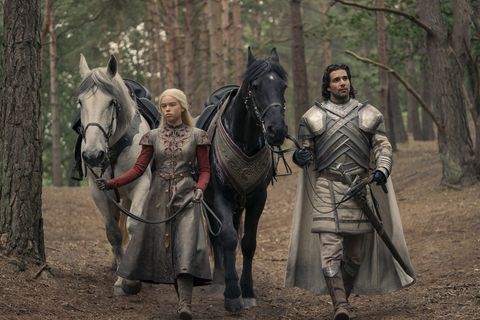 The two spend the night in the forest—I’m surprised that didn’t send more tongues wagging back at camp—but not without incident. A wild boar attacks as they rest, nearly gouging Rhaenyra with its tusk before Criston stabs it through the chest, but then Rhaenyra finishes the job, her face contorting into something unrecognizable as blood splatters her cheeks and soaks her hair. The next morning, gore still crusted along her neck, she and Criston spot the white hart. Her knight readies himself for the kill, but she commands him to stay his sword; this morning, she will demonstrate restraint. After her display of desperation the evening prior, she recognizes something in the hart’s stare, and it quells her worst instincts.

Viserys, meanwhile, is not so capable of ignoring what’s expected from him. His servants drag a roped stag before him, and so he kills it with Jason Lannister’s (ugly) spear, closing his eyes to steel himself against the beast’s pitiful, horrific shrieks. His stabs are imprecise, prolonging the stag’s suffering as well as the scene’s longevity, forcing the audience to watch and listen as the innocent creature writhes in agony. Such violence is nothing compared to what Game of Thrones portrayed any given Sunday, but its intensity is nevertheless stomach-twisting. House of the Dragon seems keen to emphasize that Viserys is a good man but a wavering ruler, and his indecision will beget its own horrors.

He later swears to Rhaenyra that her claim to the throne remains uncontested, and that she may marry a man of her choosing. But if it were to be that easy, we wouldn’t have a prequel series to watch, now would we? 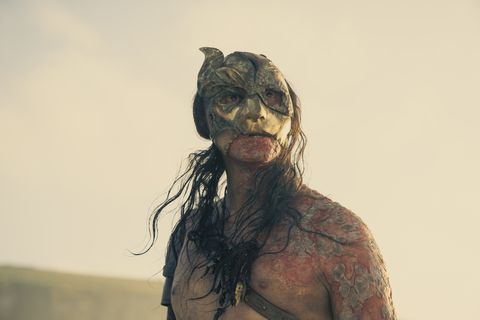 Finally, we get our first real battle sequence, and it’s an improbable, if well-choreographed one. After reading Viserys’s letter promising aid to the Stepstones, Daemon is royally pissed-off, so he pulls a classic Daemon and does exactly what he wants. Waving a white flag before the Triarchy forces, he draws the Crabfeeder and his men out into the open, kneeling before them with his sword held open-palmed. An honorable man would follow the rules of war, but…well, you know what they say about what’s fair in war.

At the last second, Daemon rips a dagger from his hip and ignites a vicious sword fight, in which he dodges approximately 300 arrows and single-handedly takes down numerous would-be prince-killers. Corlys and his forces show up eventually, which begs the questions: Why is the Sea Snake running so late? Did he sign off on this little act of trickery, after his son suggested using Daemon as crab bait? Anyway, we as the audience are forced to suspend our disbelief as Daemon carves his way through a long line of attackers, until he’s finally struck with a few arrows. Thankfully, his dragon Ceraxes makes his belated appearance, roasting the Triarchy forces alive while Daemon pursues the Crabfeeder into his cave.

We never get to see their battle, which I find simultaneously disappointing and intriguing. It’s a shame, given the Crabfeeder’s stupendous character design and his unexplored backstory. But it’s also a sign from House of the Dragon that this character is not a real character but a symbol. He is not meant to stand apart as his own person, but merely as an entity in opposition to Daemon, as a sign of what the prince is willing to do to his opposition. The fact that the Crabfeeder is torn literally in two, his intestines spilling out onto the shore beneath him, is a chilling reminder that House Targaryen cares not about who its enemies are—only what threat they represent. That sentiment, of course, extends even to those within its own house. And so, when we watch Daemon emerge from the Crabfeeder’s cave with his hair doused in blood, we are meant to see the parallel with Rhaenyra—and to fear what it forewarns.

Lauren Puckett-Pope is an associate editor at ELLE, where she covers news and culture.

Dreadlines: The Top Horror News Of The Week [March 28

Stunning New Clip From Shudder Release ‘Saloum’ Will Wake You

SPIDER MAN NO WAY HOME “Is That Your Spider Man?”

‘Lightyear’ Fails To Take Off at Box Office