On Monday, the highly anticipated film Don’t Worry Darling premiered at the Venice Film festival in Italy. The director Olivia Wilde and the film’s star Harry Styles both walked the red carpet. They appeared in front of photographers separately and in group photos rather than walking side-by-side, though they have been dating for the better part of a year.

Wilde wore a stunning yellow-green gown, with a neckline that plunged nearly to her belly button. The waist was cinched in with silver details that extended in links over the hips of the skirt, which trained behind her on the red carpet and was finished in flounces of the same material. She wore a diamond encrusted necklace that mirrored the dress’s pattern and left her long honey brown hair down over her shoulders. She paired it with open toe heeled sandals. 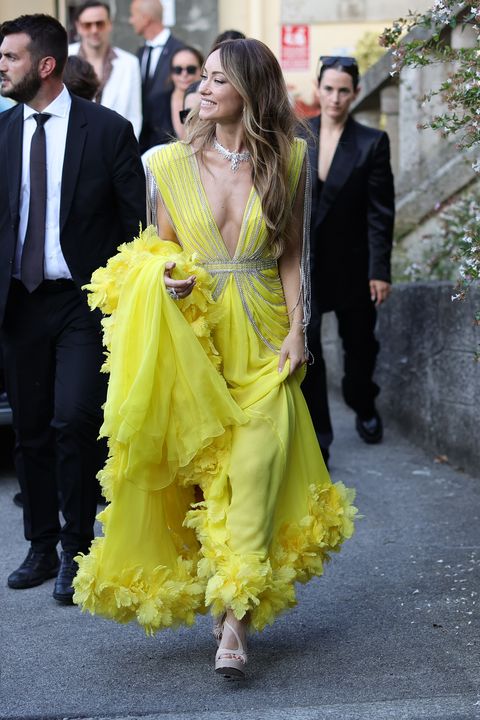 Styles appeared in a royal blue jacket with high shoulders and boxy tailoring around his torso. His slacks were loose fitting in a slightly darker hue. Under the jacket, he wore a light blue shirt with exaggerated lapels that came down in long points over his suit. He wore the look with white leather shoes and oversized sunglasses. 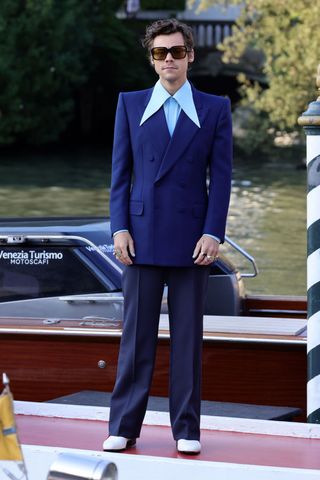 Earlier in the day, Wilde spoke at the film’s press conference, addressing alleged conflict between herself and the film’s other protagonist, Florence Pugh. Rumors have swirled about the production when it was announced that Pugh would not be attending the photocall or the press conference, which are standard appearances for most film premieres. The actress has been filming Dune Part 2 in Budapest and arrived late in the afternoon in Venice. She is expected to return to set on Tuesday morning.

Wilde addressed Pugh’s absence at the conference, saying, “Florence is a force; we are so grateful she is able to make it tonight [to the premiere] despite being in production… As for all the endless tabloid gossip and noise out there, the internet feeds itself. I don’t feel I need to contribute to it. It’s sufficiently well-nourished.”

Styles made a short comment on the matter as well, explaining the influence social media has on productions by saying, “There’s a lot of negative sides, they’re pretty obvious for anyone to see. But it’s always important to remember there are positive things happening in the world because of it as well.”

He went on to discuss the difference between his career as a musician and his move into acting.

“Music and acting are opposite in a lot of ways,” said Styles. “Making music is a really personal thing and there are aspects of acting where you’re drawing from experience, but for the most part pretending to play someone else. That’s what I find the most fun about it. What I like about acting is I feel like I have no idea what I’m doing.”

Aimée Lutkin is the weekend editor at ELLE.com. Her writing has appeared in Jezebel, Glamour, Marie Claire and more. Her first book, The Lonely Hunter, will be released by Dial Press in February 2022.

admin
Previous articleThe Boulet Brothers Are Back With Dragula: Titans
Next articleBobby Hedglin-Taylor Guests On “If These Walls Could Talk” With Hosts Wendy Stuart and Tym Moss Wednesday September 21st, 2022

For Francis Ford Coppola, a production off the rails is

These Are the Best Zombie Movies on Netflix

Blackbird, bad movies and the appeal of egosploitation cinema