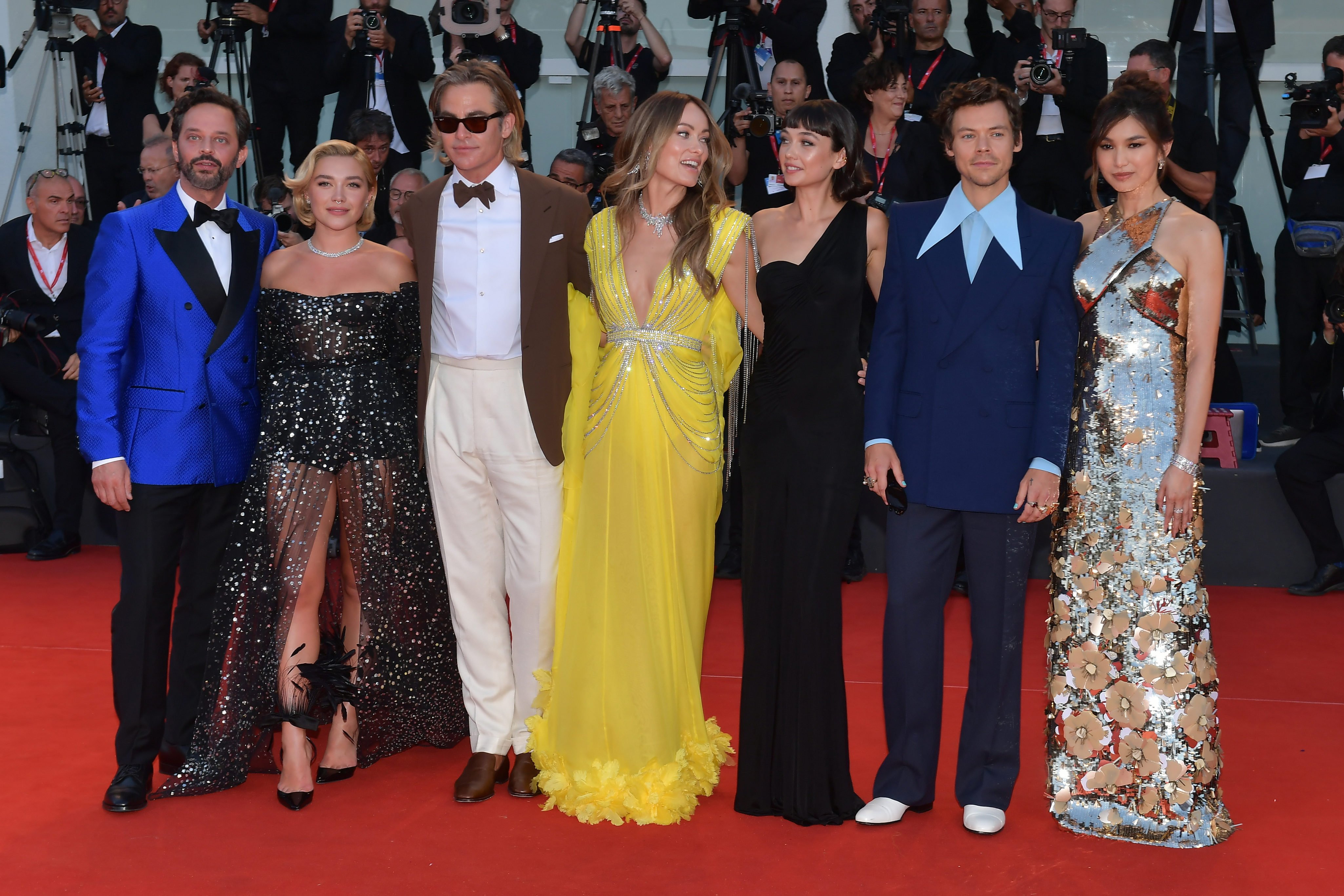 And is Chris Pine okay?

After years of toned-down glitz and virtual red carpet events, Don’t Worry Darling is single-handily bringing Hollywood drama back to the cinema. But not in the way it intended to.

Starring Florence Pugh and Harry Styles, the psychological thriller directed by Olivia Wilde was the big ticket item at this year’s Venice Film Festival. But on the red carpet, the movie’s off-screen feuds became uncomfortably apparent. From covert falling-outs to murky relationship timelines, the gossip surrounding this film has grown a life of its own. And now, it has infiltrated the outfits. Let me explain.

Gracing the premiere wearing Valentino Fall 2022 Couture and feathery heels, Florence Pugh made a theatrical entrance with her grandmother on her arm. Her sheer black off-the-shoulder dress, with built-in hotpants and a winding train, evoked an avant-garde air of defiance. Meanwhile, her co-star Harry Styles opted for a retro look in a navy Gucci suit jacket worn over an exaggerated pointed collar. At risk of stating the obvious, navy and black isn’t usually a winning combination. And while they were independently well-dressed, there was nary a single connection or couple shot in sight. Herein lies the problem.

The thing is, a successful red carpet film rollout starts with costuming chemistry. Take Dune actors Zendaya and Timothée Chalamet, who were a perfect pair in all their elevated looks. Or House of Gucci’s A-list cast consistently making headlines in coordinated designer ensembles. We’ve come to expect co-stars to emerge in sartorial bliss at such events. But at the Venice Film Festival, the Don’t Worry Darling ensemble — comprising Wilde, Pugh, Styles and other supporting actors such as Chris Pine and Gemma Chan — delivered no such cutesy moments. Despite their respective glamourous red carpet looks — Pugh in her voluminous getup and Styles in his tailored number — the two leads were sartorially out of sync. And instead of red carpet cohesion, the cast offered a glimpse into the chaos behind the scenes.

ICYMI, Shia LaBeouf was originally cast to be the film’s leading man alongside Pugh. But before production in 2020, LaBeouf left the film and Styles was recast in his role. Wilde claims she fired LaBeouf because he was combative on set, citing a “no assholes” policy. Shortly after, the world learned that she and Styles were dating.

Since filming wrapped in 2021, Wilde has been emphasizing the film’s portrayal of “female pleasure” during sex. But last month, Pugh expressed discomfort with this focus being put on the film. “When [the film is] reduced to your sex scenes, or to watch the most famous man in the world go down on someone, it’s not why we do it. It’s not why I’m in this industry,” she told Harper’s Bazaar. The British actor has since been publicly distancing herself from the project altogether.

To make matters messier, Shia LaBeouf later shared a video of Wilde reportedly asking him to stay on the project (gasp!), thus contradicting her claim that she fired him to foster a more comfortable environment on set. “You know, I think this might be a bit of a wake-up call for Miss Flo,” she says in the clip, referring to Pugh. “I want to know if you’re open to giving this a shot with me, with us. If she really commits, if she really puts her mind and heart into it at this point and if you guys can make peace — and I respect your point of view, I respect hers — but if you guys can do it, what do you think? Is there hope? Will you let me know?”

And now comes the Venice Film Festival. At the movie’s premiere, some members seemingly avoided each other, seating arrangements didn’t make sense, and ensemble photos looked simply uncomfortable. A clunky quote of Styles grasping at any English words to describe the movie went viral. Pine’s bored expression has become meme fodder. Oh, and there is now a widespread theory that Styles spat on Pine at the film’s premiere. (Though Pine’s representative denied the claim.)

This brings us back to Florence Pugh’s dress. Amid all the rumours, the actor has been somewhat elusive throughout the film’s rollout. She has barely posted about the movie on social media. At the Venice Film Festival, she flew in late and missed the press conference. But when she arrived in her glistening frock, she finally got her main character moment. As such, her black ensemble has been nicknamed a “revenge dress,” with fans viewing it as a nod to the reported fallout between Wilde and herself, the exploitative marketing of her on-screen relationship with Styles and the general bad vibes that have followed this film.

TBH, not even expert dressing could ease the stress surrounding Don’t Worry Darling. Take it from the stylists themselves, who are now somehow involved in the drama. Wilde’s stylist Karla Welch posted a cryptic message via Instagram, saying, “There’s always more to the story…” Tell us, Karla! Meanwhile Pugh’s stylist, Rebecca Corbin-Murray, seemingly threw shade at Wilde when she called Pugh “Miss Flo” in her latest Instagram post, the very nickname Wilde used in her call to LaBeouf.

And just when you thought the tension couldn’t get any thicker, Pugh had her own words at the premiere: “I think it’s very very inspiring to see a woman push back and say ‘no,’ and question everything,” the actor replied when asked what she found inspiring about the film. “It’s very exciting to see a woman do that on and off camera.”

Millie Bobby Brown Makes a Splash in a Retro Floral